When an Alternate creates an expense report for a Traveler in e-Reimbursement, that Traveler may appear in their list several times. This occurs if the Traveler has multiple appointments (such as a traveler employed by two departments).

An example of this can be seen below. If this occurs, it does not matter which of the duplicate you select. e-Reimbursement does not actually differentiate between multiple appointments. In the example shown below, you could click on any of the employees listed as George Traveler. 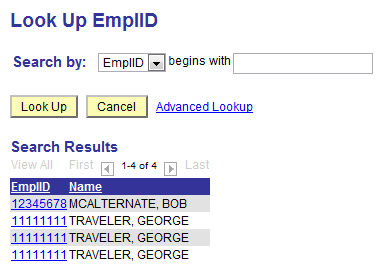