For some areas on campus, the firewalls contain rules which were migrated from a non-Palo Alto firewall. The technique used during the migration implemented a naming scheme seen below (these rule names are editable by the fw-admin):

During the firewall migration the engineers implemented a naming schema for tags to provide clarity. The naming scheme begins with the traffic direction, followed by the departmental code, then the VLAN number, then the name of the physical firewall where the rule resides. Examples are:

By default, all manually created rules are created with the type Universal. The rule "type" can change from Universal to inter/intra-zone to limit unwanted access.


When applying Security Zones, it is best practice from Palo Alto to avoid "Any" in the source or destination zone fields. This opens the possibility for the "any-any" rule to unintentionally allow sessions that are not accounted for or unintended. Rather, use specific zones for the desired source or destination.

The concept of the Application ID feature is the Next Generation feature which the Palo Alto firewalls provide, to verify access requests match the official use-case.

Palo Alto by default has columns hidden, these can be shown by hovering over a column header to display sub-menus. 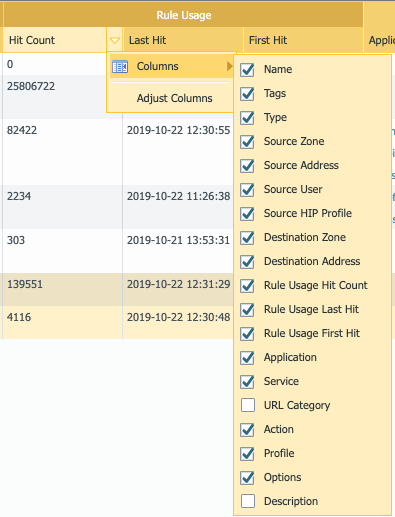 With PAN OS version 8.1 the Rule Usage hit-counters were provided for each rule. As seen in the above image the rule usage is broken down into Hit Count, Last Hit and First Hit.