| Scenario | Abstract | Introduction | Literature Analysis | Materials and Methods | Results | Conclusion | Discussions | Limitations of Finding | Scenario The American Medical Association (AMA) approached a group of researchers at the University of Wisconsin-Madison requesting a detailed report on milk nutrition and the potential health benefits of milk. The AMA has also requested that the researchers assess the economical, environmental, and social sustainability of both a conventional and organic milk production systems in order for patients to make an informed decision about the milk they consume. The question is if there are more health benefits to milk produced following certain dairy production practices, as well as to analyze if one production method is more sustainable than another. 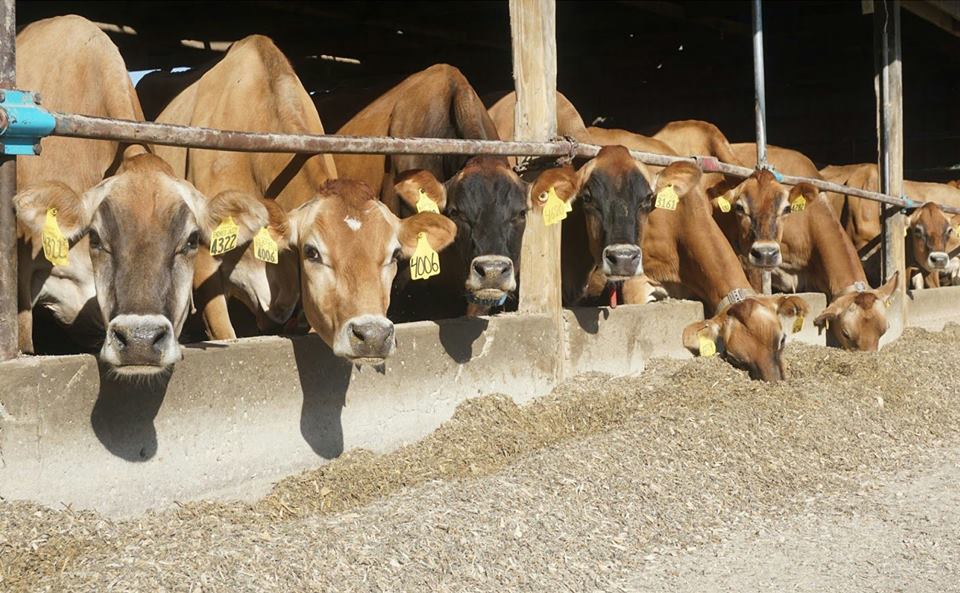 Materials and Methods To assess the health benefits and sustainability of milk, a life cycle analysis was conducted to assess the outputs and inputs of each system individually. In addition, an MIR spectrometry and interviews were conducted to assess the nutritional component of milk and to determine health benefits. The objectives of the LCA (Ellis, K.A., Innocent, G., Grove-White, D., Cripps, P., McLean, W.G., Howard, C.V., Mihm, M. 2006) was to investigation the following: - identify which system has the largest environmental impact and to suggest which method is more sustainable -to collect data on feed used in the life cycle assessment (LCA) There are three key components of any LCA: -A functional unit is the measure of output from the system. In regard to this research, the FU is corrected for before leaving the farm gate. ECM is a correction factor used by the dairy industry and considers the fat and protein content of the milk. -The system boundaries define the processes included in the LCA. In regard in this LCA, the conventional milk production is characterized by 466,625 cows and the intensity in feeding has increased along with a rising milk yield. Organic milk system is characterized by 11,259 cows and more farms are transitioning to this method. -The co-product allocation refers to the process of allocating the environmental impact to other products that are inevitably associated with the production of the main product of interest. In the case of this research, the size of farm and quality of the feed impact two main outputs: milk and meat. In regard to the LCA, we examined the outputs and inputs of each system to determine sustainability. Likewise, we considered factors such as farm size and feed in assessing each system. In addition to examining LCAs and different research papers, we conducted interviews with University of Wisconsin-Madison Dairy Science professors Dave Combs and Heather White. These interviews gave us a better understanding of what is truly causes the differences in milk composition and gave us more information on the subject matter. Both Dr. Combs and Dr. White gave brief overviews of the history of the debate on which fats are considered healthier than others. Finally, we also conducted an MIR spectroscopy to analyze the omega fatty acid contents in milk. A mid-infrared spectroscopy examines molecules that differ in the combinations of functional groups and can be used to identify them and characterize their structure. Omega 3 and Omega 6 fatty acids differ in structure and an MIR spectroscopy is more generic than an NIR and so it is easy to obtain results. Results From the interviews, we found that the difference in fatty acids (omega-3, omega 6, and CLAs) shouldn’t be differentiated by organic versus conventional, but rather, a forage-based diet versus a pasture-based diet (White, 2016). The fats in forages and pasture are digested differently in the rumen, leading to different levels of conjugated linoleic acids (CLAs) and omega-3s in the milk (White et al., 2001). A pasture-based diet has 83% more CLAs than a forage based diet (White et al., 2001). Of all the fatty acids in milk, omega-3s make up less than one percent so it is not the best indicator of milk nutrition. A forage-based diet is around a half a percent of the fatty acids and a pasture-based diet will double that (White, 2016). The image below demonstrates the different ratios of omega 6/ omega 3 fatty acids in regard to region. Regardless of location, the conventional practice was larger than the organic. Also, there is variability in the ratio of fatty acids based on the location of the farm. This graph demonstrates how fatty acid content can be impacted by factors such as location and that conventional milk ratio is greater than organic milk. 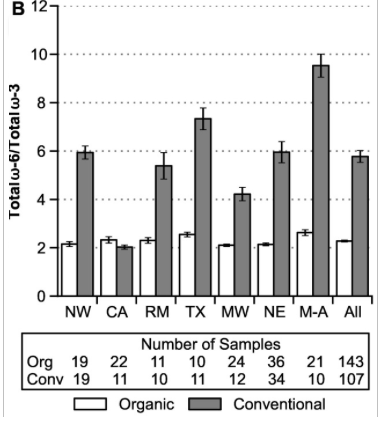 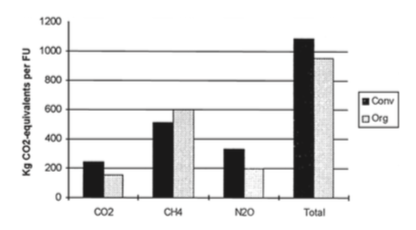 (Cederberg, C 1998) Conclusion Neither conventional nor organic milk production is more sustainable than the other or offers significant enough nutritional differences to make an impact on health. Greenhouse gas emission constitutes a large portion of dairy production’s environmental impacts in both organic and conventional systems. Although the USDA’s organic guidelines are designed to cater to people's’ social ideologies, actual dairy production methods do not necessarily result in the fruition of them. Therefore, the label “organic” does not necessarily mean production is more sustainable. GHG emission reduction practices would improve the environmental sustainability of dairy production and, in some cases, lead to higher levels of omega-3 fatty acids in the cow's milk. Since greater sustainability would result in a practice by practice basis, the best option for consumers is to know and understand the companies they are buying milk from. If increasing omega-3 fatty acid intake is a consumer’s goal, they are often more likely to achieve that by purchasing from pasture-fed cows. If a consumer has access to a farmer’s market, then farmers are present to ask about their practices and know what methods the farmer used to produce the milk. Discussions