Discussion of Ruminants vs. Non-Ruminants

Instructions: Discuss with a class partner each of the following questions for 2 minutes. Write down your notes and be prepared to share your thoughts with the rest of the class if/when called upon.

1. In your own words, explain the significance of the figure below showing the digestibility of a diet consumed by non-ruminants and ruminants. 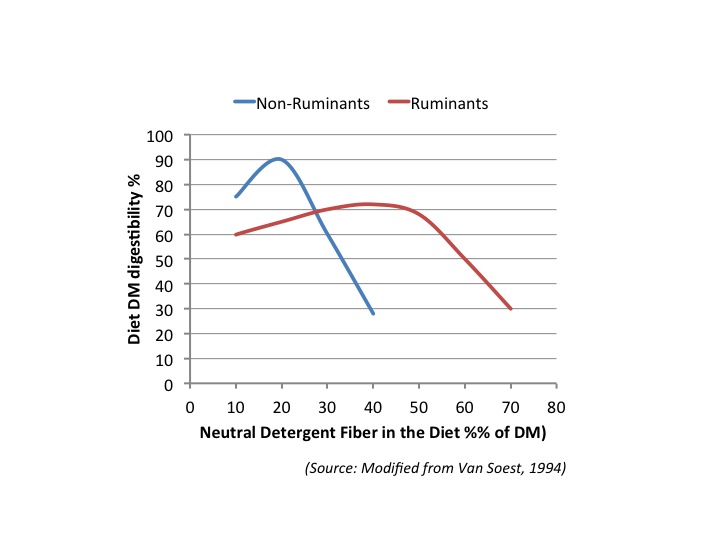 Non-ruminants have the highest relative use of dietary energy when the diet contains “low amount of NDF” (i.e., more or less 10-15% fiber). These diets will tend to be higher in fat and/or readily degradable carbohydrate such as starch which are highly digestible. Non-ruminants do not have the ability to handle large amounts of fiber in their diets and thus the energy obtained from the diet will decrease sharply as diet fiber (NDF) increases above 20%. Actually high fiber diets have been recommended as a way to control obesity in humans.

In contrast, ruminants have the highest relative use of dietary energy when the diet contains “high amount of NDF”. The “plateau” is however quite wide and range from 20 to about 55% before dropping sharply at “very higher” fiber diets. Ruminant have a greater fiber requirement than non-ruminant animals. At “very high” fiber levels, the ability to extract energy from the fiber is out-weighted by intake limitation (set amount of fiber can be consumed per day) and the work involved in the processing of the fiber (chewing activity to reduce particle size). At low NDF diet, ruminants are less efficient than non-ruminants because the loss of energy (in the form of methane) associated with the formation of volatile fatty acids in the rumen (in comparison to absorbing glucose as an end-product of carbohydrate degradation as in non-ruminants).

A 35% NDF diet is “poorly” utilized by non-ruminants, but used “effectively” by ruminants.

2. What digestive adaptations do ruminants have that make them different from monogastric (non-ruminant) animals in the way that they extract and use energy from their feed?

Some of the digestive adaptations include: a) cud chewing (i.e., rumination); b) pre-gastric fermentation of the feed in the rumen (in addition to gastric digestion; c) large amount of saliva high in bicarbonate and phosphate buffers that neutralized acids produced in the rumen in order to provide a hospitable envionment for microbial growth in the rumen; and d) A liver that has adapted to converting VFAs into nutrient that can be used by the body tissue of the host. For example, propionic acid is converted to glucose in the liver by neoglucogenesis, which can be taken up by the mammary gland to synthesize lactose (milk sugar) while acetic and butyric acids serve as building block of fatty acids that can be stored in body fat).
3. Define "digestion" by describing the processes involved.

Digestion can be defined as the process whereby complex chemical compounds (protein, carbohydrate, fat, etc.) locked into a feed resource are broken down into simpler, smaller units (usually molecular building blocks such as amino acids, monosaccharides, and fatty acids), that can be absorbed trough the wall of the digestive tract. Digestion involves both physical processes (particle size reduction) and chemical processes (enzymatic and acid breakdown of complex chemical compounds). Fermentation of feed compounds by microbial enzymes provides another mode of “digestion”.  Ruminants proper do not have the enzymes to “digest” cellulose, only microbes that live in the rumen (and the cecum) do.

4. Predict the change in pH along the digestive tract of a cow. Explain briefly the importance of maintaining an optimal pH in distinct digestive compartments? 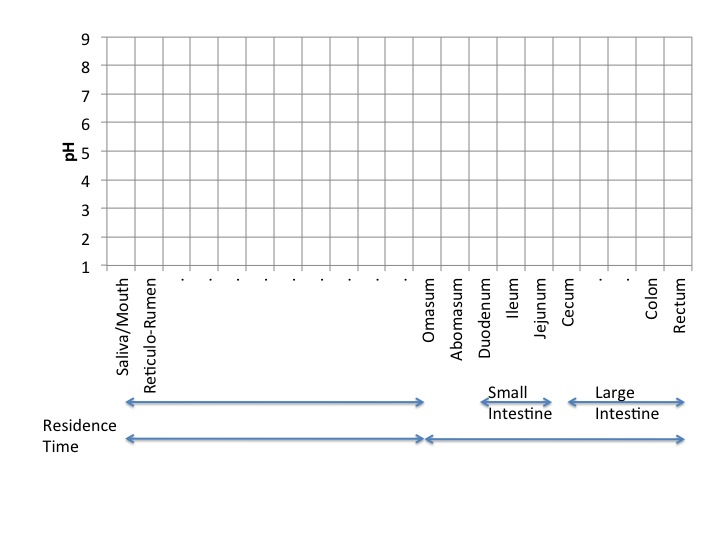 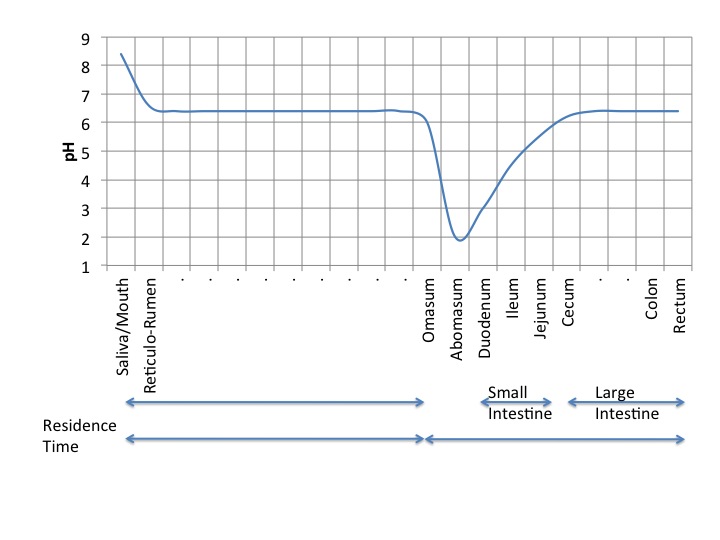 Addition of saliva to a bolus may increase pH as saliva pH in ruminant is quite basic. The rumen functions much more efficiently at extracting energy from fiber and producing microbial protein when the pH is maintain relatively close to neutrality (pH = 6.0). Rumen acidosis (dotted red line) is associated with poor ruminal fermentation. The pH in the abomasum is low (pH= 2.0) because it is the gastric compartment that produced hydrochloric acid and enzymes that can degrade feed nutrients in strongly acidic gastric “juices.” In the small intestine, pH will rise gradually toward neutrality. In the caecum, the ideal pH is near neutrality because is is a secondary fermentation compartment where microbial fermentation can take place. Diets with excess starch may lead to glucose that “escaped” luminal fermentation and intestinal digestion leading to some residual glucose fermentation in the caecum and large intestine. This undesirable situation can be detected by measuring fecal pH (which should normally be close to neutral).
5. Explain why under normal feeding conditions, little to no glucose is absorbed from the digestive tract of ruminants.
As opposed to monogastrics, major source of energy in ruminant is not glucose, but rather ruminally produced volatile fatty acids (VFAs) made of acetic acid, propionic acid and butyric acid. Ruminants can utilize cellulose and all other forms of carbohydrates because of the microbes that reside in the rumen.  Those sugars are extensively fermented into VFAs.  The VFAs are absorbed into the blood through the rumen wall and they serve as the primary source of energy within the cow’s body.  Thus, little to no glucose is absorbed from the digestive tract of a ruminant, because typically glucose is fermented entirely into VFAs by rumen microbes.

6. What are the sources of amino acids absorbed in the blood from the digestive tract of ruminants and non-ruminants?

In non-ruminants, the main and unique source of amino acids is from the true protein portion of the diet.

In ruminants, the main sources of amino acids is generally the ruminally-produced bacterial protein. The second important source of amino acids include dietary protein that escaped ruminal degradation but are digested in the abomasum and the intestine.