Instructions: Please answer the following questions assigned to highlight the main points of each article

INTRODUCTION
1) True – False. The major factor determining N excretion as manure is N intake.
True.
2) List possible strategies that may help reduce N excretion according to the authors. 1) Reduce excess N intake (“precision feeding”); 2) Improve the efficiency of capture of recycled N as absorbable microbial protein and 3) Improve the efficiency of utilization of absorbed AA .
AMMONIA ABSORPTION
3) What are the two fates of ammonia as it reaches the liver?? It is converted to urea.
It is used to synthesize Glutamine from Glutamate.
4) Reynolds indicated that ammonia is absorbed both as NH3 and NH4+ (ammonium), but at pHs commonly found in the rumen, NH4+ is the predominant form of absorption. Given that the PKa of NH3 / NH4+ is 8.83 at 35°C under what form is ammonia found in the rumen the base (NH3) or the acid (NH4+)? Explain.
At a pH of 7.00 1.5% is NH3 and 98.5% is NH4+.
At pH of 6.50: 0.5% is NH3 and 99.5% is NH4+.
5) Based on the discussion of presented in the paper, decide whether the following statements are true of false?

1) False: on average ammonia flowing through the portal vein is the equivalent of 42% of N Intake.

2) False: Within a study, the effects of diet composition on the ratio of MDV to PDV ammonia absorption have been small.

3) True: The authors used the example of stem-flaking of sorghum grain (which increases the rate of starch fermentation in the rumen) lowering ammonia flow to the PDV.

GUT UREA ENTRY
6) Based on the discussion of presented in the paper, decide whether the following statements are true of false?

1) FALSE: Old work with low protein diet indicated that an increased BUN appeared to result in increased transfer, but the review of LaPierre et al. 2001 has not found evidence for a relationship between arterial urea concentration and net PDV removal of urea from blood across a wide range of BUN concentration. Note that net PDV removal represent the transfer of urea to the entire PDV including small intestine and hindgut (bud does not include transfer from saliva).

2) TRUE: This hypothesized negative effects may be associated with down regulation of urea transporters or inhibitory effects on adherent microbial urease.


7) UREA TRANSFER CALCULATION (PAGE E296):
EQ 1: UREA TRANSFER TO THE GUT = UREA ENTRY TO THE BLOOD – UREA EXCRETED IN URINE.
EQ 2: UREA RECYCLED USED FOR ANABOIC PURPOSE = UREA TRANSFER TO THE GUT – (FECAL EXCRETION + UREA RETURNED TO THE LIVER ORN CYCLE).
The Figure below is from Lapierre et al., (2001). Note that 67% of urea entry was recycled to the gut, from which 40% was returned to the liver (second pass), 10% was lost in the feces, leaving 50% for anabolic purposes (synthesis of amino acids). 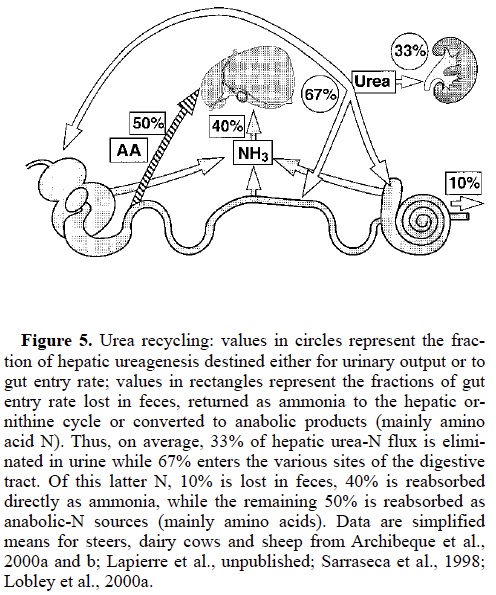 8) What point are the authors making with Figure 1 A and 1B?

9) What point are the authors making with Figure 2 A and 2B?

The are telling us that the “second pass” through the liver (which varies from 10 to 50% of urea production) goes down as dietary CP goes up (Figure 2A). Futhermore, the proportion of recycled urea to the gut that serve anabolic purpose is typically greater (28-72%) on low protein diet compared with low protein diet (17 – 26%).

10) How do you interpret the dairy data presented in Figure 4a?

11) The authors used the data of Table 1 primarily to illustrate what conjecture (i.e., educated-guess)?

The authors argued that if urea transfer to the gut is determined by fermentable energy supply, and the use of urea for anabolic purposes (e.g., microbial protein synthesis), then it is logical to expect that at dietary protein levels above a fermentation level set by intake and diet composition, additional dietary would be absorbed as ammonia and excreted as urine without a concomitant increase in the amount of urea transfer to the gut. This is very much what the data of Table 1 shows when excess N was provided in the form of urea in the diet [note that the increase of 13 g/d of urea recycled to the PDV was accompanied by a decrease of saliva N entry by -6 g/d].

12) Based on the discussion of presented in the paper, decide whether the following statements are true of false?

3) FALSE: These types of studies (See Figure 6) indicated very little deleterious effects and suggested that ruminant can rely on N recycling to adjust enery and protein supply quite effectively over the course of a few days (rather than a fewe hours in “synchronization” studies.

4) TRUE: These results were interpreted as recycling or urea to the rumen, which provided N for the microbial protein synthesis on the days the protein was not supplemented or dietary CP was low (page E302).

5) TRUE: the authors suggested it might be the case in the light of the fact that sheet fed oscillating CP diets seem to exhibit “sustained elevations” of plasma urea concentration.

13) The lack of negative impact of oscillating levels of CP in diet may be associated with which biological processes?

1) Increase urea “retention” in the blood and presumably ammonia in the rumen.
2 Storage of N into pools of nitrogenous compounds that turn over more slowly than urea or ammonia providing a more continuous supply of N for synthetic processes. Labile protein reserves.

14) Based on the discussion of presented in the paper, decide whether the following statements are true of false?

15) Under what form the “mysterious” labile N reserve could be stored according to the authors ? List at least three of the five possible “pools” listed in the reading.

1) Plasma protein.
2) Liver and viscera (increased in lean mass of these organs – see Ludden et al. (2002).
3) Muscle.
4) Increase urea pool in the blood.
5) Microbial population of the rumen or the hindgut may also serve as a reservoir of N (especially if urea transfer to the gut in increased under oscillating CP supply).

ERRORS OF MEASUREMENT OF N BALANCE

16) Explain at least three possible sources of error in N balance studies as discussed by Reynolds and Kristensen. (Note that Martin (1966) indicated that loss of N as NH3 from lungs, rumen, skin and fleece was minor. Furthermore, there was a negligible loss of ammonia from feces.)

a) Some have suggested cumulative error of measurement.
b) The loss of N through routes that are not measured (scurf and possibly gaseous losses).
c) Formation of nitrate or nitrite by rumen microbe could be excreted and not detected by kjeldahl analysis.
d) Loss of N from urine during collection due to insufficient acidification is another possibility.