Instructions: Please answer the following questions as a study guide for the paper of Dijkstra et al., (2011).

INTRODUCTION
1) Contrast the fate of ammonia when applied to the soil compared with the fate of ruminal ammonia. Explain some of the causes for the differences.

Ruminal ammonia serve to synthesize microbial protein in an anaerobic environment. In contrast, the ammonia applied to soil undergoes aerobic nitrification by soil micro-organisms resulting in nitrite (No2-) and nitrate (NO3-) and some nitrous oxide (N2O). Other anaerobic micro-organisms can subsequently denitrify the nitrate to produce N2 with again some release of N2O.
2) Name the following compounds and indicate their biological relevance in livestock systems.
NO2- : Nitrite is an intermediary in the process of nitrification (conversion of ammonia into nitrate in soil).

NO3- : Nitrate is a fertilizer. It is the end product of nitrification in soil. It is relevant because it can accumulate in forage under cold growing conditions and cause toxicity in grazing ruminant. Nitrate was also discussed earlier in class as a hydrogen sink, reducing methane emission when included in the diet.

DIETARY OPTIONS TO REDUCE N EXCRETION AND METHANE EMISSION
3) Why would feces with a high C:N ratio have a relatively large potential for C sequestration in soils? Because of its recalcitrance to decomposition (which would yield carbon dioxide) and mineralization (which would contribute to nitrous oxide emission).
4) According to the authors what are the main dietary strategies to reduce urinary urea-N losses (as described throughout the paper)?
1) Lower dietary CP

5) According to the authors what are the main dietary strategies to reduce enteric methane emission?
a) Inclusion in the diet of potentially digestible nutrients that escape ruminal fermentation.

b) Construct diets with a fermentation profile that favors production of propionic acid.

d) improved pasture management (many places around the world).

e) Feeding corn silage (because of its starch content) as a forage source.

Tier 1 is essentially the simpliest method where emission is calculated as # of animals within a species multiplied by a fixe “emission factor” for that animal.

Tier 3 is the most advanced method in which model that have been proven as valid and reliable are used to predict (multiple) greenhouse gases simultaneously in space (e.g., different crops on the farm) and time (e.g., throughout the seasons).

7) Based on the information presented in the paper, decide whether the following statements are true of false?

1) TRUE: Figure 2 illustrates that replacing cell wall with starch reduced emission, but the reduction was lower when pH is kept higher.

2) TRUE: See Figure 4a. The authors argued that it made sense because since feed intake is a major determinant of both manure N excretion and methane emission.

3) FALSE: See Figure 4b. The authors argued that it made sense because since feed intake is a major determinant of both manure N excretion and methane emission.

8) According to the modeling results presented in the manuscript, which of the following predict the impact of the following strategies on manure N excretion and methane emission expressed per kg of fat-and-protein corrected milk (FPCM):

8.2. Cutting grass silage to a later stage of maturity:
If late cut has a negative effect on DMI and milk production, manure N excretion and methane emission might be increased per kg of FPCM (because of a reduction in FPCM). Nevertheless, a more mature grass has less CP and more fiber and thus everything else equal, one would expect a reduction in manure N excretion but an increase in methane emission by delaying harvest of grass.

8.3. Supplementing the diets with corn silage:
Corn silage’s low CP and high starch content would contribute to both reducing manure N and methane emission.
GHG EMISSIONS DURING STORAGE
Below is Figure 1 from Aguerre et al., (2012) whop reported ammonia emission, nitrous oxide emission, methane emission and carbon dioxide emission of manure stored in large (55-gallon) barrels up to 77 days. Note that the authors reported a crust formation after about 21 days of storage. Drawn your conclusion in regard to changes in ammonia emission and greenhouse gases emission during storage. 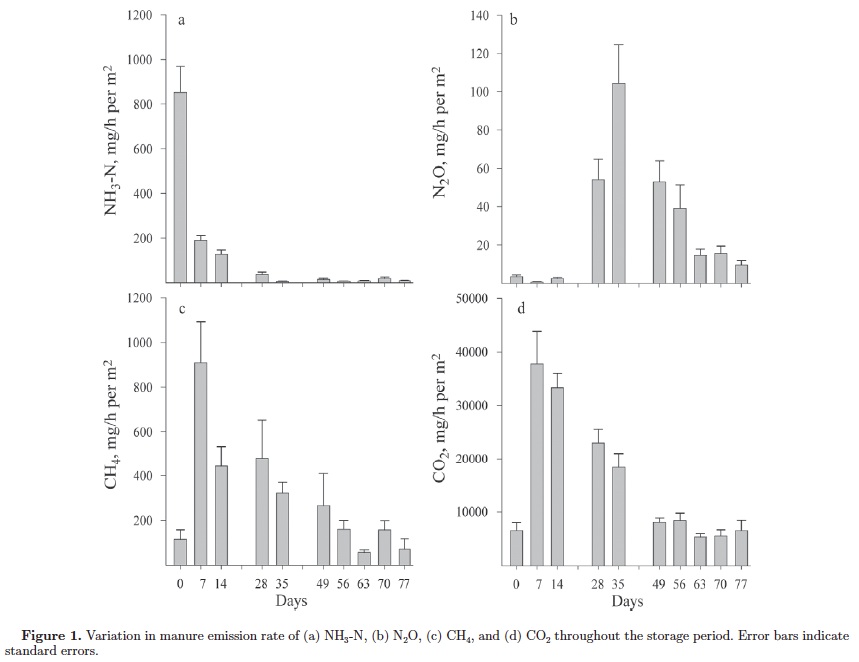 Note: This graph will be discussed in class only if time allows.

Imagine you are a consultant advising organic dairy producers who want to feed their cows such that both ammonia and methane emission are reduced. The currently use rotational grazing with 35 day interval in grazing episodes.

1. Would you recommend that they intensify grazing and shorten grazing episode to 25 day interval such that the cow consume a “younger” grass or would you recommend that they “ex-tensify” grazing and extent grazing episodes to 45 day interval such that the cows consume an “older” grass?
Younger grass is high protein low fiber. Thus it may enhance ammonia emission, but reduce methane emission. In contrast the opposite may be true for the older grass. Younger grass may have the advantage of supplying more energy and thus contribute to high cow performance.

2. What else would you recommend in order to lower methane and ammonia emission and possible improve lactation performance of the cows:
Feed corn silage or corn grain, which would put starch in the diet)
Include unsaturated fat in the concentrate mix