Learn@UW-Madison has received reports of lower quality captures on Mac OSX with Kaltura Capture. After some investigation we believe it is because newer macOS systems use pixel doubling on Retina capable monitors. Even though your Displays system preference may indicate you are at a high resolution, Kaltura Capture will only capture half to a quarter that resolution. This will lower the resolution and quality of the capture and make small text difficult or impossible to read.

There are several potential workarounds:

Second - check your Mac's Displays setting. Generally it is best to set it at Default for Display but you can also try Scaled and select the option furthest to the right which should say something like "More Space". The Displays system preference will also indicate to the left when you mouse over the option the approximate resolution. The problem is this is just an approximation and not the actual resolution the display is using. In this example I have set a MacBook Pro to use "Scaled" to approximate 1920 x 1200:

However when captured by Kaltura Capture the actual capture is 1728 x 1080 and has some loss in quality.

Third - do a short test capture of any graphics with small detail or text to see what the quality will look like in Kaltura MediaSpace before doing your full capture. If there is any text that is difficult to read consider whether you can increase the size of the text or reduce the amount of text on the slide to make it more readable. If you can't, proceed to one of the workarounds below.

Use an external non-Apple monitor with your Mac

Using a non-Apple monitor externally to your Mac will allow you to manually set the resolution in your Displays System Preference. Make sure you set the resolution to as close to 1920 x 1080 as you can, and do a test capture before doing your full capture: 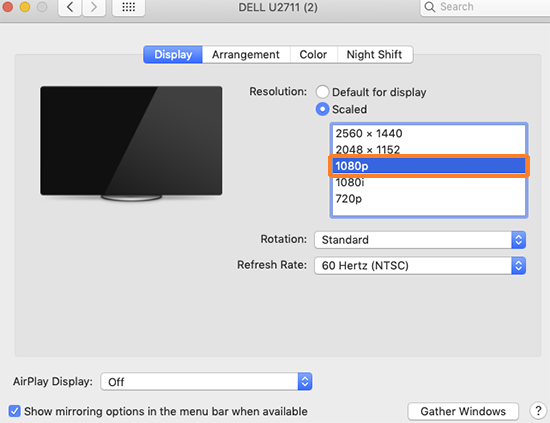 This will both give you an accurate representation on your monitor of what you are capturing and make sure you capture 1080p quality (1920 x 1080). Be sure to double check your Kaltura Capture Screen recording quality preference as described above.

Use another screen capture tool


Microsoft Powerpoint for Office 365 is capable of recording Powerpoint slideshows and exporting them as MP4 files which can be uploaded to Kaltura. For more information please see Microsoft's documentation Record a slide show with narration and slide timings. You'll need to check with your your local departmental IT staff to see if they can install it for you. Alternately screen capture tools like TechSmith Camtasia are capable of capturing higher resolution and quality but would need to be purchased.