Emacs is a very popular and extremely powerful text editor. Emacs is installed on Winstat, Linstat, and the lab PCs in Social Science 3218 and 4218.

Emacs has too many specialized commands and features to cover completely here. This article serves only as an introduction, helping you get started using Emacs. A GNU Emacs Reference Card is attached to the end of this article which lists many of the most frequently used Emacs commands along with a short description of what each command does. If you find you need to learn more, Emacs has a comprehensive online help facility where you can get more information.

There are actually two versions of Emacs available, and each can run in two different modes. Originally Emacs was text-only and XEmacs used Xwindows graphics. However, Emacs is now graphical as well. Both versions have the option to use a text-only mode, which is useful if you do not have the ability to display Xwindows graphics. The differences between the two are either cosmetic or subtle enough to be beyond the scope of this article. In this article we'll use Emacs to refer to both Emacs and XEmacs, unless the difference is important.

Emacs is not hard to learn. However, it does not follow the conventions for Windows programs. If you're more comfortable in a Windows environment, keep in mind you can use a Windows text editor, such as TextPad, and then save your files on the Linux file system where Linux programs can access them. This is a very popular way to run programs like Stata or SAS on Linux without spending the time to learn Linux or Linux tools like Emacs. Using Linstat covers what you need to know to work this way.

All Emacs commands involve key combinations. But the Emacs documentation has its own way of describing them. For example, C-key, means hold down CTRL and press key (so C-x means Ctrl-x in the way you're probably used to these combinations being described). In addition, the documentation refers to the Meta key (M-key). Some keyboards have a Meta key, though none of SSCC's do. On a PC, it depends on the terminal program you're using and how it is configured. SecureCRT has an option to use Alt as the Meta key, but if you do so you can't use Alt to send commands to SecureCRT itself. The alternative is to use Escape (Esc), but in this case it works a bit differently. Rather than holding down Esc, you press it once and then press the key you want. So to execute a command described as M-x, press Esc (and let go), then press x.

Emacs has a very helpful feature known as completion. For example, if you are typing the name of a file after issuing a command such as find-file (C-f), you need only type the first few letters of the name, enough to make a unique filename. Then press the Tab key and Emacs will complete the filename for you.

where file is the name of the file you want to edit. If you use a filename that does not exist, Emacs creates a new file. If you type emacs with no file, you'll get a window with copyright information. This will go away as soon you press a key. Emacs then puts you in an empty buffer (a buffer is a temporary workspace that may be saved later as a file) called *scratch*. Note: *scratch* buffers are not saved when you exit Emacs. Type C-x C–w to write this temporary buffer to a permanent file. 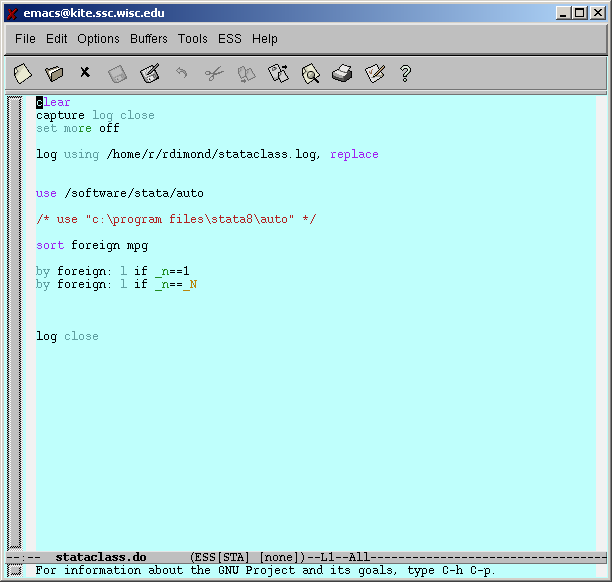 The Emacs window contains three major areas: the largest area which takes up most of the window is where you enter your text. A cursor marks your position in the file. The cursor is also called "point" or "dot".

The grey area at the bottom of the window is called the mode line and provides information about the editing session: the name of the buffer being edited, the mode you are in (Emacs has many different modes, each of which customizes Emacs for editing text of a particular sort), and where you are in the file. If you are at the beginning of the file, Emacs prints the word Top; if you're at the end, it prints Bot; if you are somewhere in the middle, it shows you a percentage; and if the entire file is visible on the screen, Emacs prints the word All. At the left edge of this line, you may see two asterisks (**). If the asterisks are there, this means that whatever you are editing has been modified since the last time you saved it.

At the bottom of the window, below the mode line is the minibuffer. This is the area where Emacs echoes the commands you enter and where you specify filenames for Emacs to find, values for search and replace, and so on.

Note the colors. The file shown is a Stata .do file. If it is configured correctly, Emacs will recognize this and color various words accordingly. See Programming in Color for details.

If you type xemacs instead of emacs, you'll get the following: 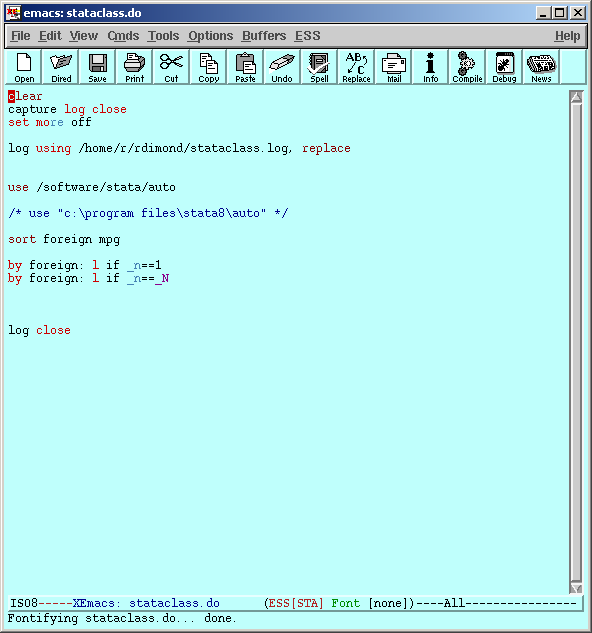 Pick according to taste. 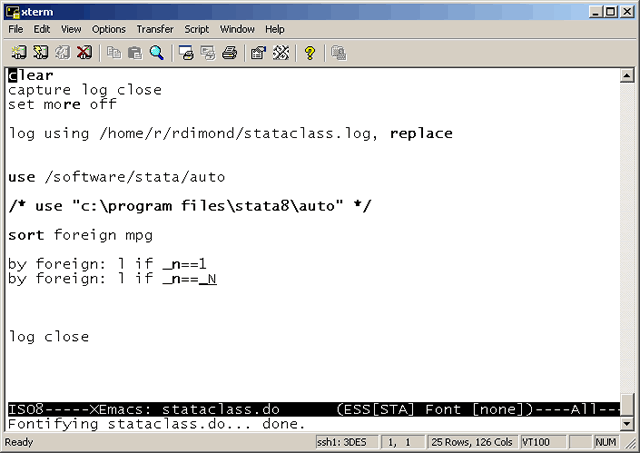 To exit Emacs at any time, type C-x C-c. If you have made any changes that have not been saved, Emacs will prompt you, asking you if you want to save your changes.

Emacs has an extensive help facility, though it is quite different from Windows-style help. If you are just starting out, the tutorial can be handy. There are also tools that can tell you more about a given command, or try to identify the command you need to perform a specific task.

To start the tutorial, in Emacs click on Help and you'll see the the Emacs Tutorial at the top of the menu. In XEmacs, under Help there is a Tutorials sub-menu, allowing you to choose the language for the tutorial. If you are running either version in text mode, type C-h t. The tutorial provides an excellent guided tour of most of the important Emacs features and concepts. However, do not use it for retrieving information on how to do something in particular. There are better ways of doing this.

If you want to do something and don't know which command to use, in Emacs click Help, put the mouse over Describe, click on Apropos Commands, and type a key word related to what you want to do. In XEmacs, click on Help, Commands and Keys, Apropos, and then type the key word. In text mode, type C-h a and then the key word. Emacs will then give you a list of commands that include the key word you chose in their titles. This is generally much less useful than the kind of search you may be used to, which searches the descriptions of what a command does.

No matter how you get help the resulting windows can be confusing if you aren't familiar with the keystrokes that control them. The following commands provide the window operations you will need in order to use the help system and exit from it when you are done:

Emacs achieves some of its famed versatility by having various editing modes in which it behaves slightly differently. Mode in Emacs simply means being sensitive to the task at hand. When you are writing, you often want features like word wrap so you do not have to press Return at the end of every line. When you are programming, the code must be formatted correctly depending on the language. For writing, Emacs has a text mode; for programming, Emacs has modes for different languages. Whenever you edit a file, Emacs attempts to put you in the correct mode for what you are going to edit.

Before you start typing, look at the mode line at the bottom of the Emacs window. If the word Fill appears, you are in fill mode. In fill mode, when you type past the end of a line, Emacs automatically starts a new line for you. If Emacs is not in fill mode, you have to press Enter at the end of every line. You can turn on fill mode for a session by typing M-x auto-fill-mode. This command is a toggle command so if you want to turn fill mode off, just type the command again.

Most of the time you can use the arrow keys on your keyboard (or the mouse in graphical Emacs) to move the cursor. Occasionally these aren't set up properly in your terminal program, so there are alternatives. To move the cursor forward one space, type C-f (f for forward). C-b moves the cursor backwards one space (b for backwards). To move up, type C-p (p for previous) and to move down, type C-n (n for next).

The command C-l redraws the entire Emacs display and puts the line that has the cursor in the center of the screen.

Emacs provides many ways to delete text. The simplest way to delete text is to press the Backspace or Delete key; this deletes the character immediately to the left of the cursor (note that this is different from what you're probably used to Delete doing). Sometimes, particularly in text Emacs, Backspace is not set to Delete, but rather sends C-h, putting you in help mode. Another way to delete a single character is with the C-d command. C-d deletes the character under the cursor.

When you use C-k, the material you delete does not just disappear. Emacs hides it away in a special place called the "kill ring". You can get back what you have killed with C-k by typing C-y (y for yank). Conveniently, if you kill several lines in succession, Emacs collects them all in a single item and places the whole unit into the kill ring; a single C-y will bring back everything.

You can mark areas of text called regions which you can then delete, move, or copy. To define a region, you use the primary pointer (your cursor) along with a secondary pointer called a mark. Unfortunately, the mark is invisible so you have to remember where it is. To mark a region, you set the mark at one end of the region by pressing C-<Space Bar>, then move the cursor (the point) to the other end of the region. Deleting text requires the following four steps:

Remember, you can retrieve whatever you have deleted with C-y. C-y also gives you an easy way to move text from one part of the file to another. Follow these steps to move text:

To read in a file to edit, see Files, below.

The Help system is simple. Type C-h and follow the directions. If you are a first-time user, type C-h t for a tutorial.

Use C-s or C-r again to repeat the search in either direction. If Emacs is still searching, C-g cancels only the part not done.

Valid responses in query-replace mode are:

The following keys are defined in the minibuffer:

Type C-x ESC ESC to edit and repeat the last command that used the minibuffer. The following keys are then defined:

Moving within a node:

Here are some examples of binding global keys in Emacs Lisp. Note that you cannot say ""M-#"; you must say ""e#".

An example of setting a variable in Emacs Lisp:

The argument to interactive is a string specifying how to get the arguments when the function is called interactively. Type C-h f interactive for more information.

Permission is granted to make and distribute copies of this card provided the copyright notice and this permission notice are preserved on all copies.