DF essentially does the job of spanning tree.

ES: Ethernet Segment. The Ethernet link(s) between a CE device and one or more PE devices. In a multi-homed topology the set of links between the CE and PEs is considered a single “Ethernet Segment.” Each ES is assigned an identifier.  

ESI: Ethernet Segment Identifier. A 10 octet value with range from 0x00 to 0xFFFFFFFFFFFFFFFFFFFF which represents the ES. An ESI must be set to a network-wide unique, non-reserved viii value when a CE device is multi-homed to two or more PEs.  This triggers the advertisement of an MP-BGP Ethernet Segment route by each of the multi-homed PEs that allows them to automatically discover each other.  For a single homed CE the reserved ESI value 0 is used. The ESI value of “all FFs” is also reserved.

PMSI: Provider multicast service interface. A logical interface in a PE that is used to deliver multicast packets from a CE to remote PEs in the same VPN, destined to CEs.

Determining the DF for an ES

Looking at an E-VPN bridge table

In the routes, the first integer is the E-VPN NLRI Route type.
Ethernet Auto-Discovery (A-D) route: In a multi-homed configuration, auto-Discovery per ESI and per EVI is needed. 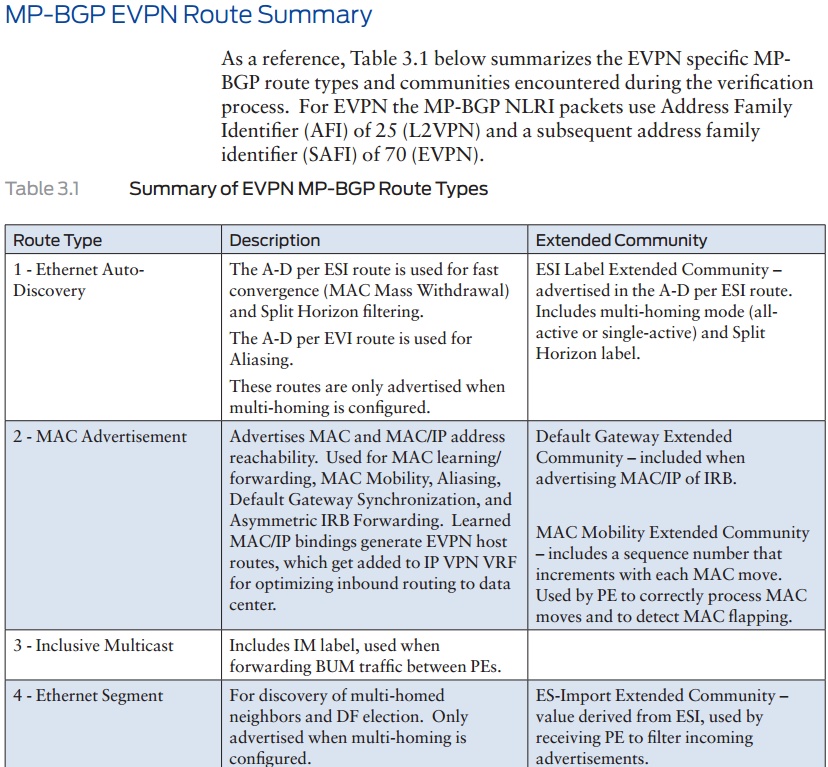 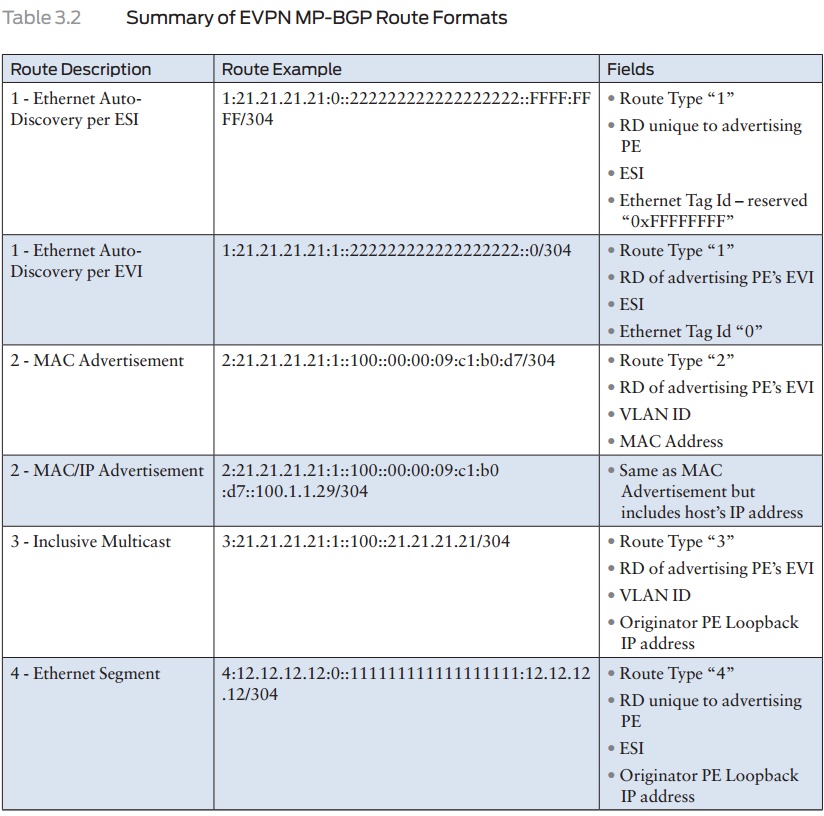 The Auto-Discovery per ESI route is used for fast convergence and for preventing the looping of BUM traffic.  It is advertised by both multi-homed PEs connected to the ES.

When a PE router detects a new MAC address on its EVI access interface, it adds the address to its appropriate local Layer 2 forwarding table, or MAC-VRF.  The PE then transmits a MAC Advertisement route using MP-BGP to all remote PEs.

The inclusion of the ESI in the MAC Advertisement route is critical for implementing aliasing, or load balancing.  Multi-homed PEs advertise their connectivity to a common ESI by transmitting Auto-Discovery routes to all remote PEs. When a given remote PE subsequently learns of a MAC address from that ESI, it knows that the destination is reachable via the set of multi-homed PEs. The PE can then load balance traffic to the multiple PEs connected to the common ES.

Each EVPN PE advertises an Inclusive Multicast (IM) route to enable forwarding of BUM traffic.  The PMSI Tunnel Attribute is the same attribute that is used in Next Generation BGP Multicast VPNs (https://tools.ietf.org/html/rfc6513). It includes the Tunnel Type that indicates the multicast technology to be used in the core network to forward BUM traffic.  In the case of type ingress replication, when a PE receives a BUM packet from a CE device, it makes a copy of the packet corresponding to each of the remote PEs. It then encapsulates each packet with the appropriate MPLS labels before forwarding the packets.  In order to simplify forwarding in the core while independently scaling the number of EVIs at the edge, the initial implementation of EVPN in Junos supports ingress replication. The trade-off in this case is the Chapter 3: Verification 49 additional processing by the ingress PE to duplicate and transmit the BUM packets. However, note that on Junos platforms the PFE, not the routing engine, performs efficient internal multicast replication using binary trees.


__default_evpn__.evpn.0: used for carrying MP-BGP information about ethernet segment routes.  This is only applicable for PE that have non default ESI [ie, multihomed CE].  All EVPN NLRI Type 4 routes are also stored in the secondary __default_evpn__.evpn.0 table since they do not contain a Route Target community that corresponds to any specific EVI.

[the below output has been truncated for readability]
m7h@r-mx104-lab-ac-re0# run show route table __default_evpn__.evpn.0 detail

Note that in below, the EVPN ES (ethernet segment) route, NLRI type 4, are isolated via show command by matching on ^4:$ip.

E-VPN with default gateways on each PE

Once the MAC/IP binding of a given host is learned by the PE, it then transmits another MAC Advertisement route which contains both the MAC and IP addresses.  This process is also known as Host MAC/IP Synchronization.  Note that an IRB interface for the EVPN VLAN must be configured in order for the PE to transmit MAC/IP Advertisement routes, which was NOT part of the initial E-VPN lab.

* ESI is non default if a CE has path to more than one PE even if the path is through the CE's switched network, not directly connected.  In this case single-active must be used.

* MAC Mobility
When a PE learns of a source MAC address via its local EVI access interface, it transmits a MAC Advertisement route to all other PEs. However, if the MAC address moves to another Ethernet Segment, such that it is now reachable via another PE, the original PE receives an MP-BGP announcement from the new PE.  The original PE updates its forwarding table with the new reachability information, which then triggers the withdrawal of its previously advertised MAC Advertisement route.
The MAC Mobility Extended Community includes a sequence number that increments with each MAC move. This is used to by PEs to ensure that the MAC Advertisements are processed correctly. It can also be used to detect MAC flapping. For example, if a PE detects that a number of MAC moves within a given time period exceeds a configured threshold it can alert the network operator and stop sending MAC Advertisement
routes. This community will be supported in an upcoming release of Junos.

On the data center PEs the protocol type BGP routes, learned via the IP VPN, are redundant. Therefore, to reduce overhead you can optionally discard these routes by applying policies to the IP VPN instance’s VRF.  An example of this is configured in the Chapter 2 section: Configuration Services, where a unique community is added to the advertised IP VPN routes such that they are discarded when received by remote data center PEs.