Background: Contrarily to carbon dioxide or methane, the ammonia produced in the rumen of cows is not emitted through the animal's breath. Because of the balance between the Pka of ammonia and ruminal pH, what we routinely call ammonia (NH3) is actually in the form of ammonium (NH4+), which is soluble in the ruminal fluid. Thus, cows do not produce emit ammonia, but we know that ammonia can be lost from the manure after it has been deposited in the gutter (stanchion barn) or the alley (freestall barn).

What is a Nitrogen Balance? A nitrogen balance can be determined using a cow dor a group of cows fed and managed together in a pen. In the former case, a cow is the "experimental unit" in the latter case a pen is the experimental unit. To establish a balance N in must be equal to N out when all the source of N in and N out are accounted for. Below are the main source of N (N in) and sinks of N(N out) that have been considered in N balance studies.

Part I Instructions: Write an equation that describes the N balance of cow as determined by nutritional studies and contrast that equation to a second one that would establish the N balance for a group of cows feed together in a pen of a free-stall barn.

Cow-level (nutritional study) with a cow as the experimental unit:

Herd-level (pen study) of cows in free stall barn with a pen as the experimental unit:

Each factor in the equation is expressed as kg collected daily from the pen divided by number of cow in the pen in order to express the results on a per cow per day basis (g/c/d or lb/c/d).

Part II Instructions: The Figure below has been extracted from Aguerre, M.J., M.A. Wattiaux, T. Hunt and B.R. Larget. 2010. Effect of dietary crude protein on ammonia-N emission measured by herd nitrogen mass balance in a freestall dairy barn managed under farm-like conditions. animal 4(8):1390-1400. It shows the change in milk N and scraped manure N as a function of N intake. In this Figure ammonia emission can be "visualized" as the area delimited by the solid line (triangles) and the dashed line (squares). Analyze the Figure and write down your interpretation of what happen to various nitrogen outputs (Y axis) as a function of N intake (X axis). 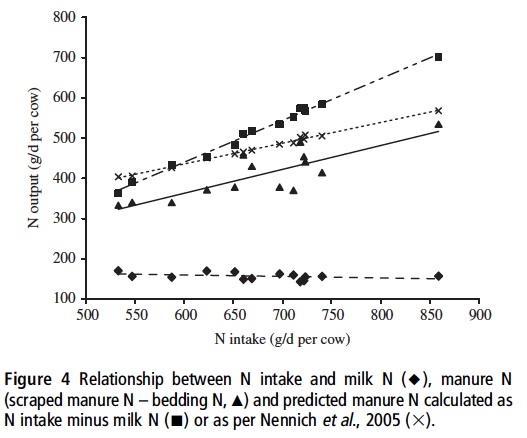 The following can be implied from studying the Figure:
1. Cows consuming more nitrogen (above 550 g/c/d) do not produce more milk nitrogen (flat line at the bottom of the Figure with diamond)

2. As N intake goes up, amount of N collected as scraped manure (the line with triangles) is going up.

3. As N intake goes up, the predicted N in the manure (calculated as N intake minus milk N; assuming the cow does not store any nitrogen) goes up as indicated by the dashed lines with solid square)

4. The amount of ammonia NH3 emitted for each level of N intake can be “viewed” (calculated) as the difference between the dashed line (square symbols) and the solid line (triangle symbols)). As you can visualized, the amount of NH3 loss increases as N intake increases.

Practical conclusion: It is important for producers not to feed excess nitrogen to dairy cows because it does not make the cow produce more milk but makes the barn (pen) produce more ammonia.