This document explains the differences between data storage units.

One very confusing aspect of data storage is the units that storage usage is reported in. Sometime GB is really gigabytes (base-10) and sometimes GB represents gibibytes (base-2) which should be abbreviated as GiB.

Storage is sold in GB (base-10), but file system sizes are reported in GiB (base-2). Those are not the same thing, and if you assume they are, any cost calculations you do will not be correct.

The base unit for data storage is bytes and the abbreviation is B (upper case). 1 byte of data can store one character in this document. To make things even more confusing, network speeds are stated in bits. 8 bits = 1 byte. The abbreviation for bits is b (lower case). You can safely ignore bits for the rest of this discussion, but know that MB/s is not the same as Mb/s. 1 MB/s is 8 times as fast as 1 Mb/s. Even though humans are used to thinking in base-10, computers operate in binary or base-2 at the lowest level. Because of that, some resources like memory address spaces make more sense to represent in base-2. Long ago, in 1984, someone decided to make computer file systems show sizes in base-2 to go along with the memory. That seemed like a good idea at the time, and when the units were smaller the size difference was negligible anyway. Now that our storage systems are much, much larger this unit difference is causing confusion.

You've probably heard of most of these on the left side, which are in base-10. The right side is in base-2. You can see that the number of bytes is similar at the small end of the scale, but they get much further apart the farther you go up the scale. The names and abbreviations for base-2 were invented in 1998.

When you buy storage for your computer the vendor almost always sells it in base-10 units. If you order a 2 TB hard drive from Amazon, once you install that in your computer it's really only 1.8 TB? What happened? Well, you can see from this screenshot that computer knows that drive is about 2 trillion bytes, but once the operating system converts that to base-2 it just looks like it has less space because of the unit. So your hard drive really is about 2 TB (in this case slightly larger), but the the file system only has 1.8 TiB of free space. Windows is just displaying the incorrect unit type. 2,000,263,573,504 / 1,099,511,627,776 = 1.8192 TiB 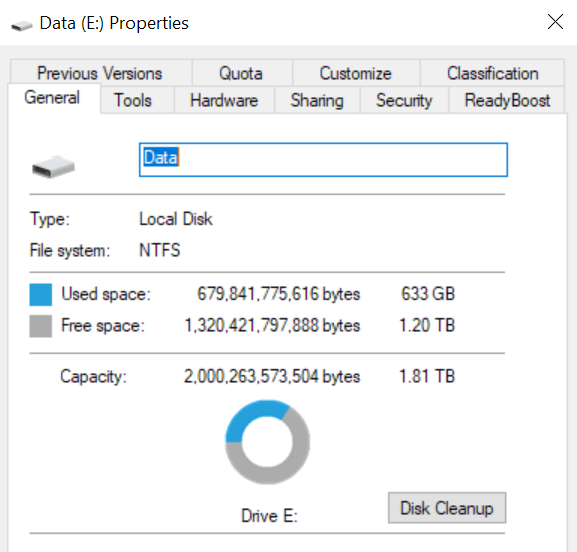 Since selling storage in the industry is almost universally done in base-10, the storage team has decided to also sell storage in base-10 units. Most of our pricing is calculated in $/GB/year. It makes it much easier to estimate costs since people doing base 10 calculations in their head just divide by 1000s. Our storage costs have been calculated using GB. If we were to start selling by the GiB the price could be off by 7.4% which is considerable when we're selling petabytes of storage. We collect and store the occupancy data in bytes, so that units could be displayed in base-2 if need be.

Isilon Displays Quotas in Base-2

Our Isilon storage system, which is the back end for the Shared Drive, ResearchDrive, and Restricted Drive services, uses quotas to limit storage usage. Isilon uses base-2 units for quotas but doesn't abbreviate them correctly. So if your quota is listed as 5 TB, that's really 5 TiB or 5497558138880 bytes. Since our reporting and billing system is based on bytes and base-10 units you may see a difference between what your bill says and what the quota reports to the operating system.

ResearchDrive PIs get 5 TB for free, which is covered by the VCRGE. Since the quotas in Isilon are set using TiB, we are going to use that as the basis for the free disk. ResearchDrive users will get 5497558138880 bytes for free before any charges are applied. Storage fees for beyond the first 5 TiB will be charged by GB (base-10) just as all of the rest of the storage is billed.

We know this is confusing, so we apologize for that in advance. We are trying to be as transparent as possible, while being consistent with the storage industry. Please email storage@doit.wisc.edu if you have any questions.

ResearchDrive is a new file storage solution for Faculty PIs, permanent PIs, and their research group members, provided through a campus investment in research cyberinfrastructure, and available in Fall 2019. It is suited for a variety of research purposes, including backup, archive, storage for data inputs/outputs of research computing, and others. It is a secure and permanent place for keeping data.