Instructions: The goal of this activity is to deepen our understanding of the concept using a comparative analysis of the small campesinos of the Highland of Mexico with what we are more familiar with: a “conventional” Wisconsin dairy farm. Below is a brief description of each farm.

Scenario 1: The Henchley's farm In South East Wisconsin: Tina and Duane Henchleys and two daughters Linda and Wendy have been dairy farming on Hwy 73 West of Cambridge, WI, since 1975. The farm, originally from Duane's family, has now passed through three generations. Duane was raised here with two sisters and two brothers. They have over 180 dairy cattle and milk 90 registered Holsteins. Replacement calves and heifers are housed throughout the farm. The 600 acres of farmland includes crops of corn, soybeans, wheat, and alfalfa. Wendy got married last year and works as an accountant in whitewater whereas Linda, who loves milking cows, left home for college last fall. She is hoping to major in agricultural business. Although Duane and Tina are sharing the milking chores, they have considered hiring Hispanic labor. The family situation makes the future of the farm uncertain. They have been thinking that given their location (30 min from Madison, 1 hr from Milwaukee), a dairy farm tour business for school and city folks could be successful.

Scenario 2: Don Cavazo's dairy farm in Acuco, State of Mexico: Gerardo Juarez Cavazos was born in the highland of Central Mexico in Valle de Bravo. He remembers the hard-fought battles and stories told by his father Emilio when the agrarian reform swept through Central Mexico and local forest and farming land was made into “Ejidos” in the 1950’s. Those days were full of promises, hope and new possibilities. As a teenager in the late 1970s he remembers the struggle of his family to make a living by growing corn, but at the time the charcoal (sold as source of fuel) was a great business and the family decided to cut trees on 1 ha of hillside to make room to plant more corn. Today is a different world. The sale of charcoal has been banned and growing corn is more expansive than buying it in Ixtapan de Oro. Of Gerado’s four brothers and one sister, two left Valle de Bravo to find work in Toluca, but he and his younger brother Manuel have never imagined leaving the land. So fifteen years ago, Gerardo and Manuel bought 4 cows after having heard that Guadalupe Tuxpan Perez and his family was paying a good price for milk. Guadalupe’s family cheese factory had been growing rapidly and is located only 5 km away from the farm in Aculco. Today, the Juarez’s brothers live on separate farmsteads that are at a walking distance from each other. Both are married and have children ranging from 2 to 12 years old. They have 15 cows between the two of them, some of the hills have been seeded with grass (as per university researcher’s recommendations) and they are wondering whether to replace “rastrojo de maïs” (dried corn stalk) with silage.

Step 1: Of the 25 criteria listed below in Table 1, select what you believe are the top 10 most relevant criteria to assess the sustainability of the Wisconsin farm (scenario 1) and the Mexican campesino farm (scenario 2). Enter these criteria in Table 2 below. Be prepare to explain your ranking. 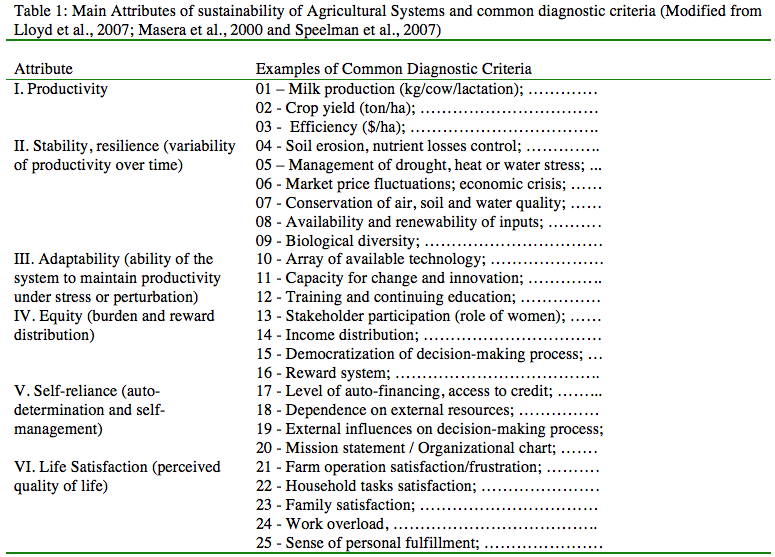 Step 2: Place the 10 criteria you have selected in the Table below and provide a score on a scale of 1 to 10 where 1 is “unsustainable” and 10 is “completely sustainable” for the Henchley’s farm and Juarez Cavazo's farm for each criteria.

Step 3: Transfer your score in the “sustainability map” (also called “ameba” graph) below.

(2) Should the Henchley’s be encouraged to specialize or to diversify to strengthen their future? What factors would influence your judgment? Explain:

(3) Should you encourage Don Cavazos and his brother to diversify or to specialize? Explain: