Note: This webpage is for instructional purposes only and the scenario described below is fictional.

Greenhouse gas emissions and their impact in global warming, have become a very important topic for world economies as many are looking for ways to reduce them. Agriculture leads to one of the higher proportions of greenhouse gas emissions specifically with human related nitrous oxide and methane emissions. For the particular country of New Zealand, agriculture is the major driving force of GHG emissions, and there have been efforts made to reduce the emissions from this source. Therefore, the goal of this website was to evaluate GHG emissions from NZ beef and lamb production systems, explore several mitigation practices, and estimate whether a shift towards one of the two production systems would result in a reduction of GHG emissions. Conversion factors for calculation of emissions for these production systems were from the Food and Agriculture Organization from the United Nations (FAO) and the Intergovenmental Panel on Climate Change (IPCC). Results show that GHG emissions in agriculture are mainly due to enteric fermentaiton the produces large amounts of methane and that the majority comes from dairy cows, followed by sheep, and then beef for New Zealand. Some mitigations practices have been researched, such as using high quality forages, legumes, and oils. Further results show that by creating a scenario of a 60 hectare farm, similar total amounts of enteric methane are produced by both species, but due to higher stocking rates achievable by the sheep system, more kg of live weight can be produced with the same amount of emissions.

A shift in the production proportion from one species to the other could prove an effective strategy to reduce GHG emissions from livestock; however, there are other factors such as economical, social, and consumer based issues that would have to be evaluated to properly assess this topic.

Agriculture accounts for roughly 10 to 12% of greenhouse gas emissions (GHG), and are the major sources of human related Nitrous Oxide and methane emissions. These values have a variation from country to country depending on how important the agricultural and other sectors are in their economies (Garnett, 2009 ; Browne, et al., 2011). The need for a reduction in greenhouse gas emissions is something scientists estimate needs to be somewhere between 50% to 85% less than year 2000 levels to avoid permanent impact (Garnett, 2009). However, protein demand is increasing globally (FAO, 2006).

The purpose of this website is to look at the emissions from beef and lamb production system, explore possible mitigation strategies, and how livestock emissions can be reduced in a fictional 60 hectare farm. 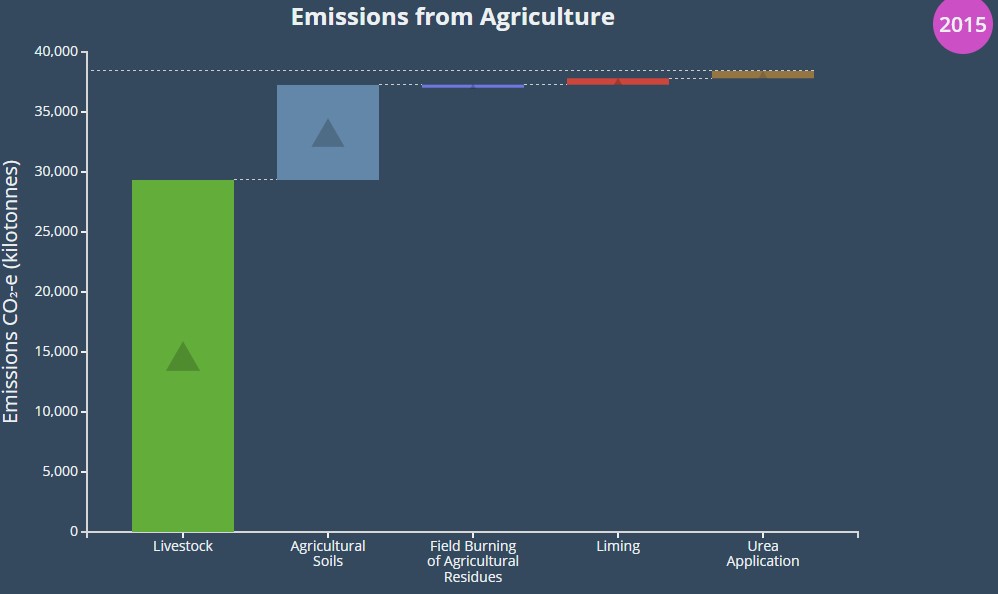 Shown above is the emissions from agriculture specifically for the country of New Zealand. The purpose of their webpage that this figure came from is to summarize review literature on GHG emissions from beef and lamb production systems and estimate if it is possible to reduce overall GHG emissions by shifting partially the production matrix towards a lamb meat market.

Why Ruminants and why not monogastrics? 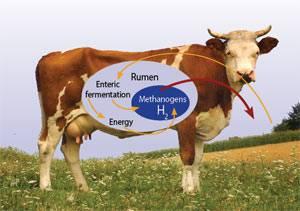 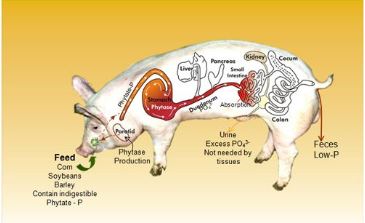 In this fictional scenario, we created the calculation below. The research team wanted to look at what type of production systems would produce the lowest amount of methane in a particular amount of land available. To expand on the previous idea, we wanted to calculate the effect of replacing part of the meat market with lamb over beef to see the effect on the overall greenhouse gas emissions. This study will draw on the calculations on consumptions of livestock products, specifically in beef and lamb. This data will be used to cross to the emissions per kilogram of product calculations and overall emissions to evaluate their impact.

For estimating how many animals a 60 hectare farm can support, we needed to look at the average production of a well managed ryegrass pasture, the estimated dry matter intake a year for each animal. With this data we could calculate how many animals per hectare and total we could have in this pretend scenario. This way we can estimate the population of animals to estimate their methane emissions.

As described in the infographic, we used the equation of Emissions = Emission Factor multiplied by the number of livestock species. It is divided by the 10^6 to get the units of tons. Emission factor for each species vary depending on the liveweight of the animals and the species. For the case of sheep, the emission factor is between 5 to 8, with the last one asasociated with a sheep with a mature weight of 65 Kg. For beef cattle, the emission factor for animals in pasture based setting is 60. 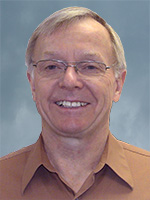 The questions that the research team drafted in the infographic shown below. The interview was conducted on April 12, 2018 at 2:30 pm.

The research team conducted a Literature Review using the database of Google Scholar and Science Direct to find articles pertaining to mitigation strategies for lamb and beef production system. Some of the keywords included "lamb," "beef," and "methane emissions."

When calculating the emission of cow calf and lamb production systems, we used a a formula detailed by the Intergovernmental panel for climate change (IPCC) that uses an emissions factor depending on the species to estimate the amount of methane produced. The emission factor for beef cattle was 60 and the emissions factor for sheep was between 5 and 8. Then, a next step was to calculate how many animals we could have in our pretend farm scenario of 60 hectares. To do this, we estimated the annual dry matter intake of these two species, that is how much feed they can consume based on the content of the feed without the water that naturally is in the feed. We estimated that a cow with its calf would consume roughly 5,800 kg of dry matter per year and a sheep with the lamb would consume is 650 kg of dry matter per year. The average yield for a ryegrass pasture, which is a high quality grass, is 14 tons of dry matter per year in New Zealand. This means that a hectare of this land can support 21 sheep with their lambs or 2.4 cows with their calves per hectare. The whole farm could be able to support close to 1290 sheep and 145 cows in total. The weight of a calf when it is weaned is roughly 230 kg, while the weight of a lamb is close to 40 kg. We expect that close to 65,000 kg of live weight to be produced by the all lamb system and 30,000 kg of live weight by the all breed systems. This would mean the whole sheep scenario could have greater emissions if the emissions factor is used as 8, but also would have more product which would mean it is more efficient in the use of land to produce meat.

"Farmers have dropped greenhouse gas emissions over the last few years, and farmers have not intentionally dropped these emissions on purpose."

No emissions in lambs and baby calves.

They actually start eating grass soon after birth and also start to produce methane, but since their intake changes so rapidly during this period it was very difficult to estimate. So this study is slightly underestimating the emissions from both these systems although assuming they would be proportional.

Study does not focus on the consumer's preference.

The study is solely in the estimation of methane produced by both these systems and not looking into if it is possible to actually transition from one type of meat to the other. Also, the study left out if the two meats could actually be nutritionaly equivalent.

Nitrates can be one potential way to reduce methane production due to its capability to bond to hydrogen. Although, the response can be questionable on how much to feed to animals as accumulation and absorption of nitrite in the diet. Legumes and the stage of maturity have shown to reduce methane production in the rumen of the animal. Sunflower oil can be an effective way with the ability to compete for hydrogen atoms, but the feed costs can increase for the producer. As we mentioned above, researchers have looked into ways to reduce the methane production, although the hunt is still on for an economic and practical applications and solutions.

New Zealand shows a decrease in methane production for sheep and beef cattle industries, although over the years they have shown a decline in the number of animals. Our results show that for a 60 hectare farm with perennial ryegrass for pasture, overall methane emissions can be similar between the sheep and the beef production system. More lamb can be stock in this type of farm, and so when evaluated by the total live weight produced in a year. The lamb production system seems more efficient in the production of methane. Also, beef calves need more time to continue the process of growth for a longer time than lamb, which needs to be accounted for in the estimation of methane emissions. This could indicate that moving towards a lamb poduction base could have a positive impact on a reduction in methane from enteric fermentation; however, on a consumer perspective preference and price need to be considered.

This project would not have been successful without the contributions of the outstanding students in our Food Systems, Sustainability, and Climate Change class.  We would particularly like to acknowledge the wonderful and challenging questions, and the specific knowledge that students with different areas of expertise provided. 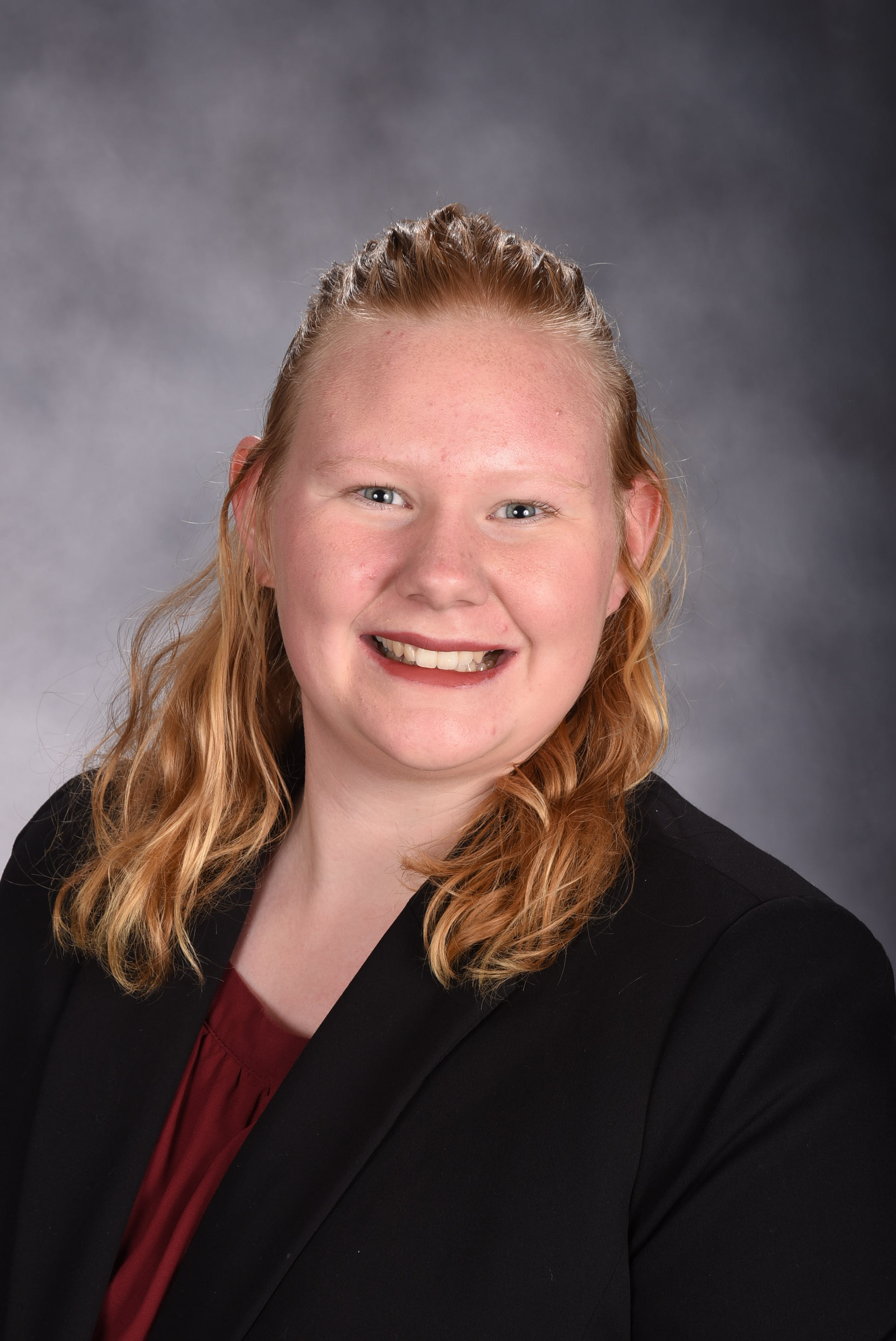 Bailey grew up on her family's dairy farm in Southwest Wisconsin and owns her own showpig business. Her intended graduation date is May of 2019. After graduation, she is thinking either graduated school or working in industry part time to start taking over ownership of her family's dairy. 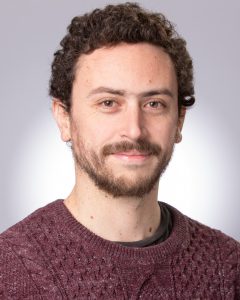 His research area is mainly in automatic milking systems. He is currently trying to find different strategies to reduce milking time and increase efficiency fo milking robots to achieve a result of more milk harvested per day. He graduated from University of Chile in 2013, and he plans to have his Ph.D by Spring 2021.